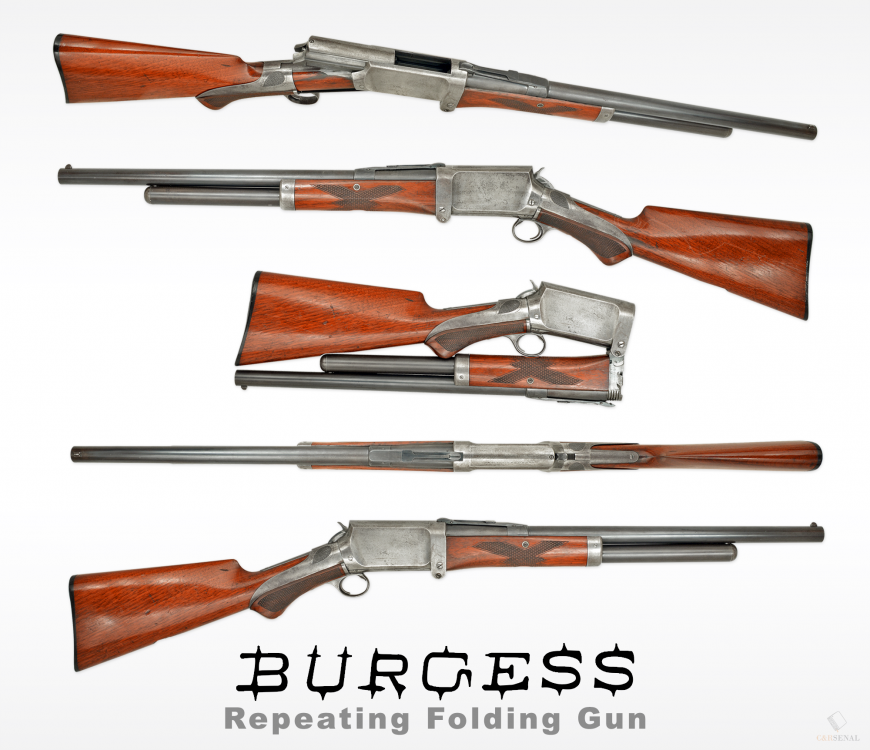 Burgess’ slide action, situated behind the receiver, provided a unique opportunity to produce a folding gun. Unlike the long gun, the folder has a hinge which joins the receiver and stock assembly to the barrel and magazine assembly. They’re held locked together by the same interrupted lugs as the long gun, though only at the top of the barrel and receiver. A large, overhead spring prevents these surfaces from disengaging, until intentionally released by the operator for folding. Halved in size, the gun could be carried in a holster on the hip and quickly deployed by simply drawing, and stiffly flicking the barrel upwards to snap back into lock.

Specifically made for buckshot, the folding guns were marketed to law enforcement, express messengers, cavalrymen, watchmen, and prison and bank guards. A story is told of “Left Hand” Charlie Damon, a professional exhibition shooter, who visited the new President of the New York City Police Board, Theodore Roosevelt, in 1895. He entered the office, apparently unarmed, and proceed to draw his shotgun and fire six blank shots into the ceiling in just a few short seconds. The New York Penal System purchased 100 Burgess Folding guns.

Ultimately this unique piece could not compete with the simple, inexpensive Winchester offerings. In old age and poor health, Andrew Burgess would sell his company to the competition in 1899, retiring to Florida. Winchester would halt production, eliminating another competitor to their 1897.